Plumbers in the market today are transitioning from copper pipes to PEX plumbing systems. This is partly attributed to the fact that PEX can be more affordable and easier to work with.

It also doesn’t hurt that PEX plumbing systems don’t require soldering, and even the seemingly complicated manifold systems are easy to install. It also works well with hot-water recirculation and home-run layouts. Plumbers who prefer efficiency over showmanship can’t get enough of PEX.

These benefits and a range of other qualities make PEX plumbing systems one of the most used water flow pipe works today. It’s no wonder why PEX is rising in popularity owing to its dynamic applications in the plumbing industry.

PEX tubing was previously used in the solar and automotive industries and have now found a unique application in the plumbing industry – replacing copper pipe systems in homes.

Since the technique and product are fairly new to the industry, many plumbing contractors are still unaware of its technicalities. In contrast, many want to know if it’s a good idea to recommend PEX to their customers. Many contractors claim it to be a brilliant concept for small settings like residencies, while others call it a sham.

However, with correct installation, PEX tubing and fittings can create a different plumbing experience. Some of the reasons why PEX tubing is the new favorite:

Advantages That Homeowners Will Appreciate:

You can install PEX water systems in two ways, namely:

Let’s figure out which one would be a good fit for your next plumbing job.

There are numerous PEX fittings and tools on the market, but the two most commonly used today are F1807 Crimp and F1960 Expansion fittings. If you are looking forward to offering PEX systems to new customers, this comparison will help you elaborate on the options: 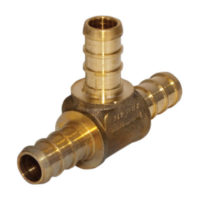 The method is specified by ASTM (F1807 – metal insert fittings and F2159 – plastic insert fittings). PEX can be installed behind the walls and is approved for direct burial within concrete and soil outdoors.

PEX crimp fittings are an easy, fast, and comparatively inexpensive method of installation. The tools used for PEX fittings are readily available in the market. However, you would need to buy the right tools according to the PEX types and sizes. 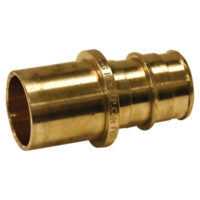 PEX expansion fittings also referred to as “cold expansion”, uses the expansion methods for connecting PEX tubing and fittings. The method advised by ASTM (F1960 standard specification) – uses a PEX expansion ring with a larger diameter pipe. An outer plastic sleeve is overlapped at the end of the pipe, expanded to insert a fitting.

This fitting system aids in stronger bonds by creating a water-tight seal. It makes the fittings stronger over time, which is due to its amazing shape memory.

Crimp or Expansion – The Verdict

PEX crimp equipment is a lot more affordable than the expansion kits. However, despite the pricing and form shortcomings, most plumbers prefer to work with expansion because installation is more efficient. There are fewer leaks, and it also seems to be more durable against extreme colds and frozen pipes, etc. Some plumbers attribute this to the fact that the inside of the fittings is a bit wider, so you get less friction during installation and usage.
Either way, you shouldn’t have issues with restricted flow; that’s pretty much a guarantee.

To make your PEX water systems run smoothly and flawlessly, always install with the manufacturer’s recommended tools, and always use a PEX cutter for cutting PEX tubing.

As a professional in the plumbing industry, you are familiar with plumbing tools, products, and devices that can help you provide the best possible services to your clients.

But thanks to the growing popularity of PEX works, more people are demanding this solution. Hopefully, we’ve given you the information you need to begin choosing the right PEX system for your business.